To take Death on as an Advisor 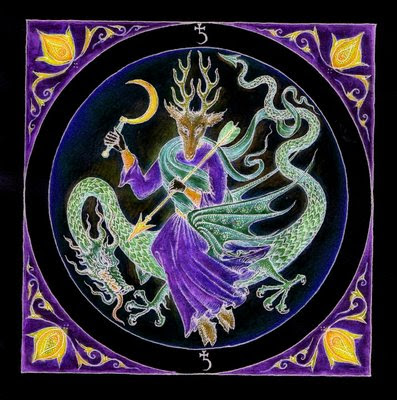 Don Juan told to Castaneda that the warrior chooses Death while the common man chooses immortality. The warrior takes on Death as an advisor and thus the annihilation of self importance, assuming responsibility and erasing personal history becomes the heart of the art of the warrior. What we should understand by this observation is that the warrior who chooses Death as the Advisor is refusing to succumb to the dream of loosing life, which motivates those who are choosing to live forever. They are choosing to walk the path of illusion and at the threshold to the other side they will be overcome with dread and fear. The warrior who has walked side by side with Death will at the crossing realize the profound peace of entering the castle.

The consequences of consciously accepting Death as ones Advisor are dire as the realization of ones worth need to be addressed and many of Death’s aspirants succumb to the protective mechanisms of our personal construct, often called ego as it virtually attacks the aspirants emotional system in order to preserve its construct. This construct we often refer to as I, me myself, is what often masquerades it self as our essence or true self. But it is merely a social construct, a way for the self to use the man made order more effectively. This condition is at times referred to as the seduction of the Demiurge amongst Gnostic schools of thought, in particular the Valentinian. This conflict is arising because of the contradictory nature of the human condition, a true paradox, where the mortal flesh and the immortal soul is united. This paradox makes man believe that flesh should be immortal as well and the refusal to accept the temporary state of the flesh causes dread and fear for Death. This in spite of Natures daily demonstrations that flesh is mortal and upon its mortal assumption it turns into a different unity, with the earth it self. Some schools of thought concludes that this reasoning will conclude that the soul is a prisoner of the body and that the world of senses are at worst a demonic charade to tempt us to focus on the world of pleasures which leads to a contempt for the world and the world of pleasures. This is the way of immortality. The way of Death will embrace the world and sensual experience for what it is, a temporary blessing, a field of experience and lessons to cultivate the warrior within. The warrior who has chosen Death as advisor will make proper use of the world and see it is the playground of the gods and ultimately realize that Nature is the lover of Death. By loving Nature and live life in a way that unfolds her mystery Death is walking in your Shadow reminding you to enjoy life and the world from the perspective of this garden of joy being just a dwelling on the road back home.

Death will encourage the warrior to erase personal history, or we might say, the importance of personal history as the personal history creates the construct we identify as who we are, but it is not so. Death teaches that this is but a way for the self to maneuver through the world. Our personal history is an accumulation of experience that we are interpreting according to our environment and the powers that lies in this environment. This means that this construct is subject to the volatile nature of the temporary state of mortal life, Death can advise us how to use this construct effectively by reminding us about its frailty. Our strength and uniqueness is not from these conclaves of interpreted experiences we are using to shape our personality, but from our divine mind, our connectedness to the godhood and the stellar rays. The constitution of the soul is temperate by the stellar rays and can be either drowned by sensorial experience and its organization or used as a compass for its mortal reflection. In this lies the virtue and dignity of man as children of the stars, shrouded in flesh, not as a veil for the corpse but as a shroud to the honour of Venus. By the senses we can come to know our soul, the senses are the pathways of Eros, and just as the soul seek love we should seek our true self within the temporal dwelling and thus become a temple for the glory of Natures stellar richness and Death’s embrace.

This walk of life forces the companion to assume responsibility, to enjoy without indulgence, to suffer without succumbing, to be righteous and up right, to not fall into the misery of the temporal or the pleasures of the mortal. Rather Death’s companion will enjoy and suffer life with the conviction that this is not an end in it self, but a field of pleasure and sorrow, a land of blessings and lessons for the cultivation of the soul and the tempering of the warrior. The companion of Death look in the face of Death and see there necessity, urge and solution. He sees in Death the ferryman that takes you over the river to the lost Eden, to the castle of the ancestors.

Death opens a road for life’s mastery, for a way of conduct based on honour and reflection, of steadiness. Death is life’s certainty and the warrior will fix his anchor in Death’s land so he can grow wise in his journey in the flesh. Wisdom is Death’s gift and wisdom stemming from Fate it self is what will guide the warrior on his path of righteousness.

There will always be enemies in the way for those who take on Death as their guide and Advisor, and the greatest enemy is the one within. The nafs that try to seduce the soul to chose immortality, to refuse Death and thus indulge into suffering and pleasure alike, affixing their hopes on the life after the veil, refusing the hand of Death. The enemy within takes on the form of Death, externalized and the divine play is whirling you in within its layers of illusions and possibilities that rebukes Death. But in the end, a man who has lived a blessed or accursed life will meet Death, Sator who will reap the mortal flesh and give back to Nature what you borrowed - in a remembrance that we are truly of the Nature. The powers of the stars and the powers of earth conjoined in one mystical and divine paradox. The companions of Death will go to their master in peace, knowing that they will lie down on a bed of jewels and be satisfied with the gifts life gave, for through Death’s door we will find home.

While the enemies of Death will at the gates of gold find only the dread of night, the crows cry and the rottenness of holy putrification, the true balm seen as a pot of worms and filth, a rupture in the temporal fabric perceived as unnatural caused by the desired to be everlasting.

As such the warrior who takes on Death as his Advisor will walk the way of the Sage and in this lies the secrets speaking of the reddening of the gold, the stone made visible and the ashes brought back to being. With Death as Advisor the vinculum from the height to the depth are established on the pole of the worlds. For in the North the Power resides.