Inúkògún – He who is Crooked inside 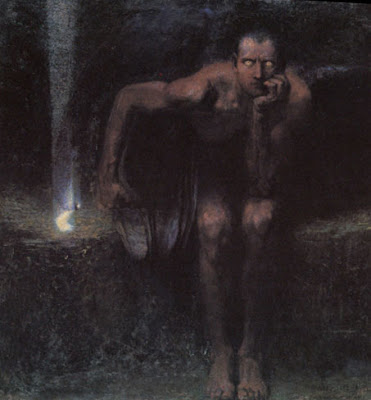 At times life runs towards a crossroad where decision has to be made and upon making the wrong decision the devil is to be blamed – and the devil transforms into the idea of enemies both singular and plural. The ‘logical’ conclusion is that we are under attack and magic is the solution. But this logic quite often belongs to material society and the equally modern mechanisms of psychology. At times people are truly under the shadows of something malefic, but these cases are rare – more common are the cases of self hexing. These are typically noticeable by restlessness, anger and paranoia. These powers motivate the afflicted person to search for a magical fix, not realizing that a magical fix applied to situations like this is like cutting a tree with a hammer – it tends to lack precision as the root of the condition is not addressed, but rather a cluster of effects. The typical self hexer is spoken of in the Odù Ifá, in the omodu ìkáwòrì where Ifá speaks of a person called Inúkògún, whose name translates into “he who is crooked inside” as a contrast to the straightness of a pole of iron in reference to Ògún. This Ifá verse tells that Inúkògún is “the self-injurer, one who acts against himself”. He acts against himself by plotting injuries and malefic against others and the verse says about this that “One who throws ashes is followed by those ashes”. This condition is typical for many people searching magical help, especially where the presences of enemies are found. Enmity is always caused by an antagonism between two parties that is disproportional and is experienced to be in ontological conflict. But there is no ontological conflict, there are only wrong measures. Another ifá verse, Ejì Ogbè, tells how the distance from the fingertips to the elbows are different than from the shoulders to the feet, an admonition to think clearly before we act, and admonition to not “grasp our good fortune in a hurry”. Rather this ifá verse tells us that we should move ourselves around in the world “with dignity and measured movement”. So, if there is no enemies, only misjudgments in ones perception of measurements any act of malefic stemming from the person itself is indeed like throwing ashes against the wind and colour yourself in your own fear and paranoia. So, don’t hex yourself, but bless yourself, so you can bring dignity to your life by measured movements. Ase O!