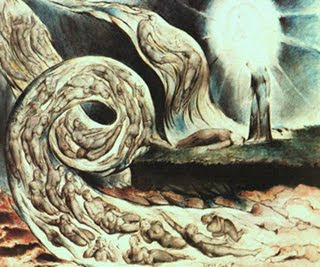 Oh! Be Thou Consecrated

As Thy word is given and taken

So mote it be

Be Sacred Accursed One

Be Accursed Sacred One

Watchful eyes be upon your brow and hand

As your foot steps the wheel of Fate

Oh! Be Thou Consecrated

By word and silence

May the Blessing, Curse and Cunning pass to be Thine

Consecration is the act of setting something aside, to make it sacred, The mystery of consecration is deeply related to the Greek Anathematizo, which means “to bind under a curse”, which is derived from anathema, which does not only mean “different”, but also “consecrated” and “accursed” In the Latin language the words detestor  and sacer are both giving head and tale to “consecration”. The latter refers to someone being set aside as belonging to a deity, while detestor means “to bring down a curse”. Naturally, the consecration is walking hand in hand with the oath, to give ones word as a man and woman of honour. The oath as taken in the Craft is always rewarded with the act of anathematize, the word of honor is bound under the curse of the watchful eyes of the angelos watching the moment when the oath is given and bound.

It is from this mystery we can understand that the Art defends itself and how the oath given in dishonor will always turn back upon the one set aside who will then untie to curse and walk astray into the exile of his or her choice. The act of consecration is commonly seen as a significant part of traditional craft initiation, and can be as simple and to the point as giving ones word or oath to more elaborate and lengthy procedures. The most important aspect of the initiatic oath is the silence that perforates it. It is here in the silence the breath of nous will invigorate the oath and bring it to meaning and effect. Actually, the oath and the silence are factors of the initiatic ordeal that verifies the claim to traditional pedigree. In traditional African faiths the consecrated one is physically isolated for a time, as in traditional strands of the Craft, where the consecrated is isolated to meet the sworn deities and submit to the oath.

By the involvement of detestor a reference to temptation, to forces attempting to shake your faith and word is reminded upon, for also the unruly forces are released for the sake of making your disposition firm. St, Anthony and his temptations in the desert is famous is as the 40 days and nights in the desert by Jesus Christ when he confronted his angelos detestoris and solidified his oath in silence under the curse. And it is this mystery the wayfarer encounters when his or her word is given within the stream of genuine traditional transmission of the living light, from whatever true lantern. The silence profound is hidden within the solitude and its many shades, the all-oneness, but in the loneliness it remains a creeping shadow of the accursed, the twine blade of word and commitment.

From this we have the cunning phrase that says so much more than the few words it speaks, May the Blessing, Curse and Cunning Be.