Review: Kiumbanda - A Complete Grammar of the Art of Exu 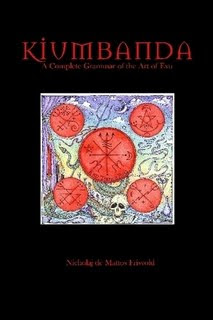 I have been absorbing this book for some time now and I am surprised there has not been more attention given to it online, and at a time when all the New World traditions seem to be enjoying so much attention in popular occulture. Its a print-on-demand publication that I discovered and bought through lulu.com. I could find little discussion about the content or the credentials of the author so I just took a chance and bought it, based on the fact that Nigel Jackson did the cover art.


I was surprised and then thrilled by the quality of this text. Nicholaj de Mattos Frisvold is articulate and writes with the insight and enthusiasm of someone who has not only been steeped in the subject but has a tremendous love and respect for it. This devotion is plainly evident in his writing. It contains some of the glitches that these sorts of self-published works tend to have; typos, grammatical issues and or other editing mishaps, but with this text I barely even noticed or cared. This is unusual for me because bad editing is something that irritates me thoroughly and in truly dismal cases such as Jason Miller's The Sorcerers Secrets, can be a deal breaker for what otherwise would have been a good book. Not so with Kiumbanda: A Complete Grammar of the Art of Exu. Despite these textual glitches, the author's voice remains clear and his exposition of the subject is lucid and fascinating.

Frisvold begins by saying that he does not speak for the tradition as a whole but instead offers his take of this Afro-Brazilian tradition known as Quimbanda, or as Frisvold prefers to call his presentation, Kiumbanda. Quimbanda is often understood as the left hand path to Umbanda and has a deservedly fierce reputation as a blistering fast and dangerous form of spiritist magic. This reputation has led some to think it is a vulgar sort of afro-brazilian satanism or simply a pernicious black magical technology. Frisvold takes great pains to elevate his tradition beyond this perception, and really, to instate it as an elegant and even beautiful spiritual path. Having said that, the author's warnings proliferate throughout the text, portentously noting:

"The powers of kimbanda and kiumbanda are real powers. It is the union of earth and fire and the spirits themselves possess a force and strength so massive that they can make the soul bleed and the astral anatomy be shaken into shreds and pieces in order to accomplish the solidification of man's true essence".

Starting out with that dire statement and several exhortations that the would-be Kiumbandista seek out proper initiation, the author does something peculiar but perhaps appropriate for the nature of this text: he offers a complete and exhaustive manual, a grammar, for contacting and working with almost all the major spirits of the system. Pontos riscados (the mystical sigils that one draws to call the spirits), ponto cantados (the songs used to invoke) as well as offerings; other correspondences, and for the majority of spirits, a working of some sort is given.

It is no exaggeration to say that a wealth of material has been offered in this text and certainly more than enough for curious and hapless dabblers to "fuck their shit right up", as the turn of phrase goes. I mean it. If you are a self styled "evil-sorceror" enthralled by the ooky spooky 'voodoo' aesthetics of New World magics then here, my friend, is a quick and deadly way for you to destroy yourself! Step right up.

And this is what I like about the boldness of this text. Frisvold does not hold back and he does not baby-sit his readership; because these fierce spirits take care of their own system and those who stray onto their crossroads better be ready to do so or they will be turned into soft fleshy playthings for the Exus. To give you an example of just how feral these spirits are: Frisvold discusses the syncretism between the demons of the Grimoirium Verum and the Legion of Exus remarking that the GV sigils are used to bring forth a gentler, more wholesome aspect of Exus. That's right, spirit-seals from one of the most notorious black grimoires ever written is used to calm down the temperament of these entities.

It is perhaps this syncretism that is one of the most interesting aspects of the Quimbanda/Kiumbanda tradition, because as the saints were syncretized with the spirits if Umbanda and other New World traditions, Quimbanda took for its spirits the mask of the devil. A reasonable evolution considering that missionaries kept calling their system intermediary, Exu, the devil! But as Frisvold is quick to point out we must not be fooled by this syncretism into thinking the Exus and Pomba Giras are demonic. The role the Grimoirium Verum plays in the system is nuanced and complex and Frisvold makes his disdain for oversimplification as well as the satanizing of the system abundantly clear. Similarly, the author pays short shrift for Thelemites appropriating Pomba Gira for their Babalon or any other short sighted thelemic mash-up.

What this book does beautifully, in my opinion, is to offer one of the most elegant and articulate philosophical frameworks for so-called left hand path type of magic and spirituality I have yet encountered. This clever and considered evolution could only come out of this New World synthesis between African, Brazilian and Western magics. The reason? It is exactly because of the New World traditions' inherent ambiguities - ambiguities that naturally transcend the distinct moral and philosophical dualisms western occultism is inevitably drawn into - that such a coherent path has developed. If you are truly looking for a 'left hand path' of gnosis then here it is, as a living breathing tradition that quite validly traces back for thousands of years. And as Jake Stratton-Kent once suggested on his Grimoirium Verum yahoo group; that is because the greatest magical synthesis since Alexandria is really taking place in these New World traditions and not in the bourgeois occult boys-clubs of the west - as so many occultists have vainly fantasized.

This is not an easy book to own because it is so enticing - seductive even - like Pomba Gira, and like her, dangerous as a switch blade. I find myself coming back to it again and again mining it for insights and for examples of sophisticated ways to work with dangerous spirits in a folk-magical oeuvre. If you are interested in Afro-Diaspora religion and magic and especially the synthesis between western grimoire magic and african forms you should get this book. If you are interested in left hand path gnosis and you are sane and have sense of self preservation you should also get this book. If you are an angst filled instant-occultist in black tights looking for a cook book to help live out your dark fantasies of using 'voodoo' powers to crush your enemies, then, I recommend you take up yoga and leave this book be - it will be your undoing.

But then again, you probably wont be missed anyway.

The book can be ordered by visiting http://www.lulu.com/