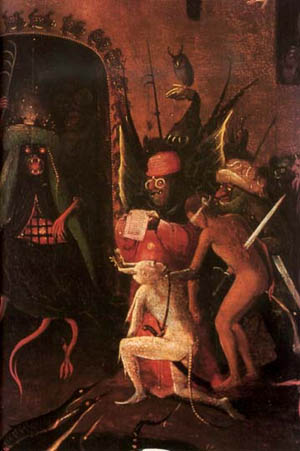 In the Book of the Treasure of Alexander we find in the chapter concerning the fourth art an operation for dispelling “evil in poisons”. The antidote uses the gall bladder and brain of a ferret together with pearl, red coral mixed with Melissa and nuts. This must be done under the auspicious rays of Jupiter, who removes the evil in the poison. This poses an interesting dilemma as evil is stated as different from poison, albeit tend to make part of a poison.
If we stay in the world of plants we find that various types of Soleanae, especially the nightshade types are effective antidotes when poisoning hath already occurred. So, what is considered vicious and poisonous can upon the influence of evil be turned into something of a healing nature.
I suspect we find a harmony here between evil and d-evil. The icon of the devil is surely soaked in poison, but it is not the image of evil per se, like none of the nightshades are evil. This relationship seem to be quite consistent from the middle ages where we find terms like “evel” in Old English and in the Germanic roots “euvel” and gothic “ubils”. Given the insanity inherited in etymology, it might be valid to take into account all these developments simultaneously, I do believe evil, by virtue of its gothic word, can be traced back to the Greek and Roman idea of “hubris”. This would make sense seeing that the cardinal sin amongst the seven deadly ones, where “hubris”. Now, hubris is not solely pride as we modern westerners understand it. It is a pride related to destiny, to what Fate imparted in your purpose. In Antiquity “hubris” carried the penalty of death and in this was veiled that you acted in ways improper to your destiny. Hubris, like evil is an adjective, so it gives a direction or a certain coloring, to an action. In Antiquity “hubris” was usually referred to acts that led to humiliation and shame of people. It was and action done by a distorted sense of self importance that gave the illusion of a right to debunk others. In the Greek world “hubris” became the nucleolus of tragedies. Acts of hubris never ended well but were still situation within the greater comedic frame of human life, perfectly portrayed by Dante, if we care to read his work with the right frame of mind.
Hubris as “evil” related to what we know as moral. Moral is all about ones character and not some material decision made in a political order. A good character will always inspire to good things, largely abundance of all kinds, a good character seeks blessings for himself and all people. Poison in the hand of a good person is a medicine of healing. Bad characters always have some relation with restriction. It is about restricting blessings for others, envy, gluttony and hatred comes easy from the prideful one.  I dare say that whenever a person is deliberately attempting to usurp your good fortune by spreading poison evil is flourishing. In Latin “malus” were used for the same and it had a clear connotation to slander and gossip. We know it today as “evil tongues” and the same people who possess the “evil tongues” also possess frequently “the evil eye”, envy.  It is this tendency that goes down in history, of acting in ways that restrict other people’s fortune that is at the root of evil. This means that Saturn who hath domain over the nightshades is not evil. He is simply offering a remedy that by the additional coloring of the user can be turned into an evil. Evil is not a noun, but an adjective of the poisons. The d-evil as the master of knowledge of course easily turns into the vile one since this belongs to his domain, poisons, that mainly are considered antidotes, unless some greedy and gluttonous individual deiced to use the healing poison to end someone’s destiny. Evil is hidden within everything, as a color to our actions. So, any slander and ill will, any deliberate act of crushing someone’s happy fortune represents a deliberate unleashing of the evil resting within the healing poison.  This truth is found in the world of plants and it is found in planets and amongst humans. Evil is in the intent and the d-evil is simply the one who presides over the realm of the most illuminating poisons. Its abuse should fall at the feet of the abuser and not the devil.