The Line of Blood 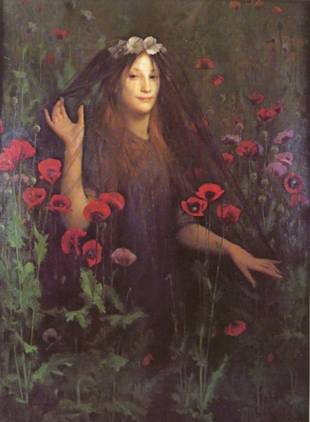 Art by:  Felicien Rops
The Idea of transmission of a lineage as viewed from within the wise Craft proper is one of complexity.  It is a transmission in the original and traditional sense and not simply one of transmitting customs developed in a social conclave. The transmission itself is the conferring of power and memory as it relates to a particular consciousness that hearkens back to the origin of creation. The lineage lies in the blood and the memory that is passed on by virtue of the blood is of the same order as the divine wisdom held by angels and given to the women. This memory comes with a creative power that set the wise apart from the mundane and profane. A rebellion comes with the power of the blood, not a rebellion on antinomian premises – but a rebellion against the profane and vulgar. It is in this the wise goes against the grain as a rebellion against the modern ideas of progress. To be subject for an authentic transmission of the accursed blood indicates a reception of this potency. This reception is of a prophetic pedigree that quickens slumbering intuition and veiled memories in a great remembering of who we are. This remembering quickened by blood and lineages rests on traditional principles, which was explained in simple ways by Maimonides in the following way:
"The foundation of all foundations and the pillar of all wisdom is to know that there is God who brought into being all existence. All the beings of the heavens, and the earth, and what is between them came into existence only from the truth of God's being"
It is the memory of beginning that stirs in the one who has been subject for the transmission – and from this a drive towards mastering ones Fate is unleashed upon the world. This transmission can happen by the work of the blazing torch, which indicates induction into a clan or family of shared blood. Here the doctrines of primordial law are laid out for the wise and the path can be embraced with greater ease and Fate be mastered in eloquence.  For some the blood quickens in an instant as if the flash of a thunderbolt gave life to ones soul and a rebirth to the original is accomplished as the skin of the old is left behind as one journey out in the world in search of one’s kin. With earth and angel, plants and winds as guides the path is thread as the blood flows in path and soul.
The transmission is like rekindling a candle made from the first dragon’s blood and wax – it is the beginning of wisdom. This wisdom defies dogma and the cultivated order of ‘civilis’ in favour of the untamed freedom of the soul accepting its unique destiny. The wise sees in nature the supreme temple – the house of God, where She reveals herself in all moist beauty. She is the memory of the land and from Her is born all diversity. She is the mother of nymph, plant, wolf and bird, Queen of Queens that mates with the heavens.
Today, in the Night of Candles she opens the doors to her secrets and welcome the pilgrim to her door. Today the pilgrim on the bloodied path of mystery shall take a single beeswax candle and to the oldest tree of the land the petitions of gratitude shall be said in honour of the dragon below and the mothers whose bones rests in the light of the black lands.