The Initiation of Self 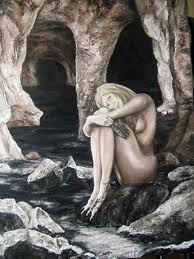 Gradually the idea of self initiation is spreading in the format of initiating oneself to a given cult, faith or tradition. In particular this is common in forms of eclectic wicca and witchcraft. It is a curious idea that at the same time as it enters the core bounces off from it. As I perceive the nature of self-initiation, it is about a person that feels a certain calling and administers the rites of induction himself with no intermediary or teacher present. It is an offering of servitude and dedication to a power one desire to evoke. On the good side it denotes a personal choice, and affirmation of belief where the chosen spirit host is evoked to witness the act. It is a symptom of mankind feeling spiritually lost and seeks to reconnect with what they perceive as lost. They want to re-ligare, to re-link their faith, they want to do religion.  Quite often what is happening is actually what the crude term self-initiation entails, that you initiate your (spiritual) self. It is a declaration to creation that you are igniting yourself to a spiritual search. This is wonderful – but turns problematic when the same self initiated proclaim initiation into an existing cult, faith or tradition of which they have no link by blood or breath. In this they try to re-link something that is lost or something that was really never there. They initiate themselves to a fantasy of belongingness.
This extended idea of self initiation – that you as a self dedicated votary can appoint a cult or tradition and say you belong is quite erroneous if not even boastful, especially when the tradition in question actually exists and you have been unable to connect with it. From where I stand, this should tell you something, namely that your dedication did not called upon your kin. This is what happens in many cases, which people simply usurp traditions and faiths and self adopt themselves into the stream without any approval or link with the tradition in question.
This is a modern possibility and one of the reasons why I see modernity as a regress and not as a positive progress. So we have people who are self initiated into Stregoneria or Basque craft. These people commonly is drawn to the allure of the name or the mythopoesis they could get hold of – but for me that has placed my feet in the dirt and drunk this fire – it is odd to see this possibility surfacing; that a person with a sentimental inclination imposes himself upon my blood and family. Even worse is it when I see that nothing of my blood and family is spoken of but a dislocated and faulty devotion to whatever spirit in the so called pantheons, demonstrating a complete lack of understanding, veneration and understanding of the mystery that has made its web beneath the tradition in question. For me it is as weird as if I would decide to adopt myself into the family of Bragança or Lionheart – just because I feel an affinity with the shield of the family. I find this quite ludicrous because true tradition works as a solid rock for our faith. It is the crossroad between the blood proper and those who holds the mark that mediates the tradition proper. It manifests in solid Magisters and Maids who secure the passing on of the torch so the lightning bolt of the nameless ones can set you afire in the fullness of your potential. Tradition is the crossroad of human intercessors and mortal man that etches light into the stone.
I believe a good initiation of the path can start with a solitary dedication to nature and a chosen spirit. But it is this, it is a beginning of a path, not a clanship taken in the breath, wine and blood given in the moment of dedication. The self initiation is about initiating yourself to begin your spiritual path. This is a good thing insofar as we keep our attention upon ourselves and do not project matters into a illusory belongingness.
I guess this is yet another modern virus, that everyone wants to be something lofty and worthy in the name of ambition. Everyone wants to be priests and priestesses of something. In this the spiritual search turns into a displacement of personal issues. By aiming towards title and status we can forget about our self and the great work we all are presented with when it comes to the work on self. Doing this we can transmit our own personal dysfunction to a larger group and tend to the problems we have given others as if they didn’t belong to the founder of the dysfunctional faith. This is important, because when you assume the role of priest, priestess, master, guru, magister, your quality in this office rests in how you initiated and solved the mysteries of self.
So, I present for reflection in the end; when you seek a self initiation, what do you seek? When you state a denomination or traditional pedigree to your initiation, what are you really stating? When you state you are priest/priestess – who are you really and why did you took on this office?