The Movement of Sin 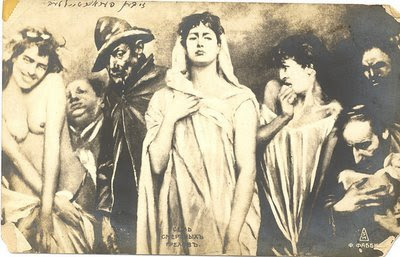 In 1589 Peter Binsfeld, the Bishop of Trier, in Germania noted down the demonic influences that provoked the cardinal sins as it was derived in the paranoid and poisonous climate around King James I of England. Shakespeare’s Macbeth was inspired by the reign of King James the I. Certainly the king saw things he wished he had not seen in Denmark and Norway and this spawned his famous work on demonology; because the land keeps the memory of truth as it whispers in our blood, forgotten or alive.
For Binsfeld, this grim paranoid hunter of the supernatural, the most vicious sins were considered to be lust (luxuria) for men, ruled by Asmodeus and pride (hubris) – or vainglory – for women - ruled by Lucifer. Curiously both sins were frequently given to women during the trials. Woman was deemed guilty for exciting the sin in man because of her vain stature. In our modern vernacular this simply could mean that she did not give in for the lustful suggestions of the accuser perhaps?
What is interesting in this classification is that sins are given genders – and so are the demons. We see here that Asmodeus the spirit of lustful indulgence is a woman who tempts men to follow their desires.  Lucifer, the ‘ur-male’ or sorts who brings the fire to women is more ruled by restriction and preservation. Asmodeus veils as women and turn into an object of lust while Lucifer in his serene prideful and dislocated state takes the position of the one who chooses whom is worthy to mingle with him.
Seen like this, we might wonder if what we see in our modern day and age is only a watered down presentation of this demonic tension between the untamed lust and the restrictive glory of vanity.  I mean, the apple was given to woman, King David succumbed to desire for Batsheba as King Solomon for the Queen from Sheba. It is something low in the lustfulness of males that provokes when confronted with the vainglory of women. Man see in woman the totality and he hearkens towards it – in this he commits sins as he flies away from his mark and wants more than what is his.
Sin being mediated by the demons of pride and lust is intriguing indeed. We know lust and desire is in the field of Venus – but what about pride? All planets are prone to this – to want more than what Fate gave – to be more than what you are. A negative pride can occur, when you belittle yourself and see yourself as less than what you are and seek to take less than what is rightfully yours.
Lust or luxuria most likely followed the transition from Venus Pandemonium as authored by Eros himself. It is love flooding the lands and here pride rises as poles of stability that gives Eros direction and possibility for ascent. The fiery Lust is good – and a man who carries this fire should spread it as the pillars of vain support dictates. Lust or Eros is Love telling us it is bountiful – but the pillars, the flaming trees of Lucifer held by woman dictates its direction. There is no sin in acts done truthfully – the sin lies in acts forced upon a field that is not yours. Such  acts of besiegement  testifies to a lack of perspective and in the end a form of immaturity that speaks loudly about ones inability to guard the flame within ones perimeters and a restlessness with what the fire should ignite.
The Lord of Light gave the tree, the stout erect tree of the third heaven to woman so she could be the power that made the compass on earth. It is from the serpent’s furrows on the land we see the movement of sin and salvation.