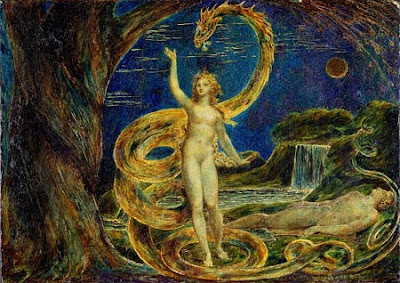 “Those who cannot walk the path alone will be throd upon by those who can”
-           - Andrew D. Chumbley
The witch is constantly presented as something from the outside that affects the natural order – itself being a part of the natural order – but who possess knowledge forbidden. This is a true arising from Jules Michelet and his poetic renderings of the perennial themes making up the icon of the witch as from ethnographies and confessions collected both in the pre-modern and modern world. Perhaps the more ill fate has become the people from the outside in modern time where another element has been added to the icon of the witch, namely superstition. George Ewart Evans comments upon this in his exposition of rural folk magic in Britain that this word, from superstant, in the meaning of ‘standing over’ or being guiding principles for cult and culture today invites provocation and violent reactions because it is conceived of as an assault on common sense and reason.
The Russian mystic Maria de Naglowska in her treatise The Light of Sex identifies reason with the realm of the satanic, understood to be what denies life and seeks its annihilation. With the advent of the age of reason the overarching goal of attack was superstition and consequently everything outside the material sphere obtained a renewed demonization. In the pre-modern world the witch was something volatile and unpredictable, but with modernity the witch also became a threat against reason. The witch became myth and legend – still its existence nailed the modern scientific dogmas and interests with the fact that they are still to be found.

The witch embodies the perennial in a world of scientific temporality, a manifest of a world greater and more enigmatic than what can be dissected with modern scientific tools. The witch is an arcane remembrance that annoys rational man and his reason. The witch carry the torch of the necromancer and fortune diviner, the spell caster and the horse charmer – as do many other practitioners of the magical art today. The witch however is in a different class altogether because here we find preservation of family and here find the reverence of the wild and untamed natural state of being. The witch became due to impossibility, the merging of the blood of angel and the blood of man – and this impossibility is continued since Cain, Erichto, Medea, Circe, Simon Magus and many nameless ones through mankind’s history encoded in fables, legends and myths.


Andrew Chumbley wrote in the 81st issue of The Cauldron:


“The Old Craft is emerging as a Path possessing a diverse array of aspects, ranging from the practical spell-craft generated at the level of folk-magic - the artes of wort-cunning and animal encharming, through a learned spectrum of magical techniques, reaching in apotheosis to the heights of genuine mysticism.”
It is the diversity that makes it so difficult for men of reason to pinpoint and dissect the nature of the witch as much as it is the diversity along both sides of the path that enables the one witch to recognize the other. For the path is the track of one – but not necessarily in loneliness. The witch is the one from the outside of the here and now, the one who comes with irrational perspectives that makes so much sense – and often gives solace. Many are those who can walk the walk and many are those who can talk the talk, but few are those who can charm the horse or summon a spirit. This reality the modern world has judged a rational impossibility – so it is left to those from the outside of the orderly work, those beings of night to secure the torch of possibility that whispers of a world infinitely more wide and mysterious that what human reason wants it to be. When we come from the outside the distance between the superstant world and the manifest world becomes wide and the contrasts salient. It is here the witch becomes the healer and the wise one – the distance from the outside to the world of cities and dust brings clarity – and for many coming from the outside a twain viper of compassion and misanthropy.
The outside is the origin of the path, the Northern Gateway where the black light shines with such force that shadows are only cast as the witch moves from the outside and into the manifest world of reason.  As solitary warriors, journeymen and soothsayers they come from the outside, from the shadows of the world, each and every one in their own track marked by the blood that makes the path unique.