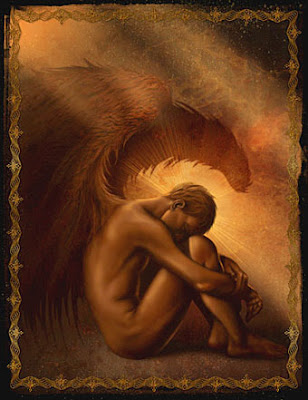 “John answered and said, A man can receive nothing, except it be given him from heaven.” -  John 3: 27
Sometimes the star of enlightenment hits us profoundly, it can be anywhere and with great power. Today while reading The Grimoire of Arthur Gauntlet edited by David Rankine I came across a passage of such effects, which I quote here:
“Man is ordained a Magician from the womb of his mother that would be a true magician. Others that have taken upon them this office are unhappy. To this agreeth that which John Baptist saith No man can receive any thing to himself unless it be given him from above.” (The Grimoire of Arthur Gauntlet p. 71)
This passage is interesting because of many things; one is that some weeks ago a lengthy sequence in Michael Cecchetelli’s most valuable translation of two grimoires in Crossed Keys where from page 177 an onwards the Gospel of John is provided as a universal remedy flanked by the seven psalms, the litanies of the Saints and Our Father.
I find in this some interesting webs meeting that speak of destiny and what we are fated to do. In the past matters were simpler in traditional societies, at birth a divination was done in order to discover the celestial imprint on the newborn. Here was found both psychological imprints and counsel that would bring utmost fulfillment for the infant in question. A blue print was given and upon this crude map of life the walk of life with its blessings, lessons, bane, defeat and triumph could be written as we walked on in life owned or borrowed.

In our day and age, saturated with the modern spirit, matters are more difficult, because this blueprint given in the past is not superstition and we are told to make our luck void on this blueprint and instead taking on a collective measure of failure and triumph. I say; good luck in taking on measures that are not yours when you set out on the pursuit of happiness and meaning. I believe that when you set out on the journey of life we need map and compass to be in order. When we try to orient ourselves in conformity with the map of Japan when we are in Bhutan do not lead to any success in our journey. I believe the map is this blueprint we forfeited and the chosen compass is either random or by social pressure – where do we end up? We end up unhappy because we do not walk truth, nor towards truth.
The Gospel of John in its first verse and Chapter tell us:
“In the beginning was the Word, and the Word was with God, and the Word was God”.
Certainly this passage concerns Jesus the anointed one, but it also concerns all bene Elohim, or Children of God. The word, the logos, is the manifestation of a particular essence, divinely given and divinely manifested. We are all gods walking the earth, what makes the difference is if we remember this or not. We can remember by remembrance or by failure, as much by a cursed bane as a blessed.
I can’t help but quoting myself in this, where I write in Pomba Gira and the Quimbanda of Mbùmba Nzila the following: “The diabolic realm was seen as inhabited by spirits not weighed down by morality and ethics. They did not judge, but instead they understood, and on the basis of understanding pacts were made….The spirit retinue of Quimbanda has much to give and can aid in maturing our understanding of the world, if we can only allow them to do so.” (Scarlet Imprint. 2011: 2)
I believe this passage summarizes the threshold and crossroad of modern man who wants to cease his destiny. The pact spoken of is aimed towards the disclosure and understanding of the ‘word’ – the seed – of our becoming.
Maybe it is in this dilemma we find so many unhappy masters of other people’s life and self appointed chieftains of spiritual welfare, people who used different maps and wrong compass to arrive to a destination in the land of fantasy? In this there is also the sadness many find with mages and masters harboring negative sentiments and seek to dominate and control. It is all a reflex of trying to take what was not given in the womb, a rebellion against the bane of failure and an insistence on the wrong road being the right road.
I speak here of destiny and Fate and what lot was given to us, whether we like or not, I speak of the word that was at the beginning that makes the blueprint of godhood upon earth. It is about taking counsel from the streets and from prophets – and it is about a humility aimed towards your own secret word and its becoming. I mean, we shall all flourish – and perish –  the dual road is of our own making. We are divine words, with a purpose unique. To find what belongs lead to contentment and deeper roads, what does not belong is met with restriction and frustration where a unfitting mask and model is forced upon the godhood. In in this we meet Fate and the spirits of streets and crossroad that call upon our compass to move towards our designated route...