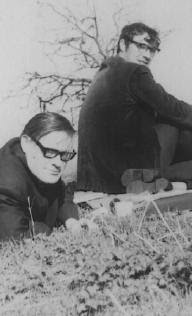 On Robert Cochrane and the encounter with Fate
The bane that Cochrane chose for himself, and the ally he went away with can speak to us about the influence of Saturn and Moon in Cochranes life. He chose to go away tempered by Saturn and use the road of the Moon in the ally Belladonna. Maybe in the choice of ally to take him away to the Hidden Company we can understand more about Cochranes approach to the heart of the matter. The Circle of Tubal Cain and thus understand the magical polarities in his pellar craft, that he demonstrated in ways that seem to be odd as far as his ritual suicide is concerned. The polarities I have in mind are those between Chance or Fate and Wisdom (both in its female octave as well as its demanding form of the Horned Lord) as can be seen in the mysteries held within the realms of Tubal Cain and Lady Fortuna.
There is a sixteenth-century French engraving that is striking in the case of Cochranes understanding of Fate as Goddess. In this engraving, depicted in Paul Husons book, we see Lady Fortuna sitting across Lady Wisdom (MOT: 37). Lady Fortuna is blindfolded, holding the wheel of humanity in her left hand. Lady Wisdom on the other hand carefully monitors the cosmos and make sure that her image is reflected within creation. Here symbolized by the proper symbol, the mirror, which she hold in her right hand. The Wheel of Fortune is under the dominion of Lady Fortuna and it need to be mirrored by wisdom, since Fate is conceived of as blind – or should one say, that her blindness forces humanity to open their eyes to the influence of Fate? It is my belief that Cochrane realized some profound teachings during the time of difficulty with Jane, which was used by Lady Fortuna and Lady Wisdom to tamper his soul and aspiration, to rejuvenate his soul if you will into a greater level of perfection and humbleness. This, I believe is how one should better view misfortune, as the lesson who tampers our soul into a better condition. One can get the impression that he simply gave up in the face of misfortune (or Miss Fortuna if you will) and searched for a way out with dignity. By searching in Cochranes own words there is perhaps possible to find a clue to this riddle and also extract a lesson.