The Night of Otherness 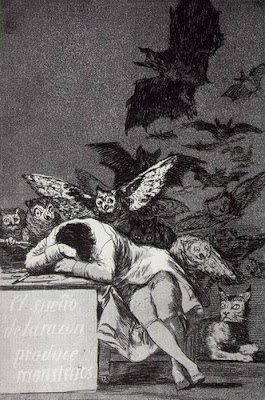 “Define me – and I shall escape it…”
- Liber Combusta
No matter how much we try to define what ‘witchcraft’ is it will still preserve its mystery – and I believe this is how we recognize the presence of the traditional pedigree that constitutes the witches’ arts and crafts.
At the core of what defines a witch we find the mark and the blood. No matter what continent we turn to we find that the icon of the witch is steeped in otherness. She or He is that which escapes definition and by this linguistic poverty the western tendency is to paint the witch with diabolic strokes and the ink of forgotten nights – and indeed; the witch is a child of night – because it is in the night – under the rule and breath of the Moon – that the ancient blood is quickened.
The idea of the witch or sorcerer being someone not of this world, something unruly, untamed and potentially destructive is found from Norway to Africa. We can exemplify this by the practice of the seidr, being an art practiced by the Volva – and commonly understood to be a knowledge possessed by the vanir Freya. Actually this is not true, Freya was taught these sorcerous arts by Hyrrokin or Heid who initiated her into these arts – and by this quickened Freya’s sorcerous blood. The blood in question here is the blood of Ymir, the first giant that was slaughtered and made into creation. The ‘witch’ or fjølkynnig was born from his sweat and blood - a pre titanic race from before the gods of mortal men. Likewise in Japan, China as well as Russia and Eastern Europe the witch and wizard is constantly linked with Dragons and falling stars – something other and outside the solar order. In the same fashion we find ‘witches’ in West Africa described in the corpus of Ifá to have entered the world by deception and trickery – but goes on to define their function in the world – which is one of night, calamity, mystery and birds of night...
In all these cultures the night-flight is a common theme, it be to rescue or damage crops, it be to heal or harm society. The night flight is possible because of the particular pedigree of the witch – it is a heritage and legacy many ascribe to Lord Cain and the fallen angelic host which sets the witch apart from the civic order. Because of this the ‘witch’ will always perceive the world differently, because witchcraft is a living dynamic interaction with the spirit denizens of the world, for good and for ill. This defies the solar order and it defies any profane attempt of making the volatile fixed. The Witches’ art rebels in face of the static, such as disconnected rehearsals of folklore and reenactment of pagan customs. Witchcraft in the traditional sense is a volatile dragon flying through the silver night. It is that other which is seen in the corner of your eye and the nocturnal embrace of that all otherness which calls the blood to quicken.