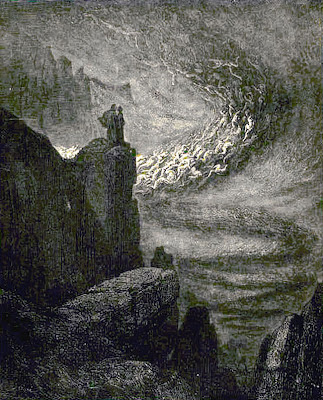 "But every man is tempted, when he is drawn away of his own lust, and enticed. Then when lust hath conceived, it bringeth forth sin; and sin, when it is finished, bringeth forth death."
- James 1: 14 - 15

-    Luxuria, or better known as lust is by John Cassian understood to be the very womb of sin and death in accordance with James 1. Whereas pride/hubris is the seed of sin, lust is the womb of the sinful seed. Today the word ‘lust’ carry an overtly sexual and hedonist flavor and in truth one of the predecessors of ‘luxuria’ is found in the activity related to porneia or prostitution, but more than this, luxuria is a thymus, an appetite. Perhaps the most proper idea that still carries on the inherent idea of ‘luxuria’ is actually luxury – in other words, an excess. In Antiquity as in galenic medicine all disease was caused by excess of something, in the cause of ‘luxuria’, we are speaking of an excess of pleasing oneself. This self pleasing is of a nature that generates disequilibrium. This disequilibrium will cause one to seek the pleasure of the flesh in excess, it be wine, debauchery, money or whatever that pleases and arouses the flesh. A great example of ‘luxuria’ proper is found in Dunmore’s ‘The Libertine’ (2004) about the life and demise of the Earl of Rochester. The important lesson here is that because of his ‘sin’ he executed his destiny in imperfect ways and consequently reaped disgrace upon his death and testimony...

Fornication and hedonism is also ideas close to us when we hear lust being mentioned, it does have a sexual connotation, a sensual rouse where the devils of coitus and angels of orgasm sing their tritons and serenades in the name of lust. But the focus on fornication is perhaps distorted as the sin, ‘luxuria’ is about a distorted focus on the bodily sensation of pleasure. As such any addict will be ruled by the demons of lust, because addiction is a hunt for the pleasure of the flesh at the cost of anything else. ‘Luxuria’ is one of the means humans use to escape bad feelings and states in general and is the route of escapism.

Any love binding is a child of ‘luxuria’, where an sensual obsession of a flesh that is not one’s own turn into something of primordial importance, neglecting anything but the desire and its object. Lust is the sister of sorrow and granddaughter of despair because the lusting one in absence of the desire will have only sorrow and despair to support the obsession that is taking shape.

Interestingly, Dante is seeing those suffering from ‘luxuria’ as people who have lost their reason to appetites, and in this he hits the nail at the centre of the heart – the sin of lust is about losing one’s reason in favor of the appetites of the flesh, to please a sensation. Dante writes in the 5th canto of Inferno:

I came into a place mute of all light,
Which bellows as the sea does in a tempest,
If by opposing winds 't is combated.

The infernal hurricane that never rests
Hurtles the spirits onward in its rapine;
Whirling them round, and smiting, it molests them.

When they arrive before the precipice,
There are the shrieks, the plaints, and the laments,
There they blaspheme the puissance divine.

I understood that unto such a torment
The carnal malefactors were condemned,
Who reason subjugate to appetite.

For Dante the hurricane is the element of passion and desire that replicates the works of ‘luxuria’ on the soul and he takes this a step further by speaking about those he see in this infernal circle. Of these we find Semiramis that was reputed to make debauchery a lawful obligation of her citizens. In other words, it is about the abuse of others for the gratification of one’s own desire for sensual, sexual or emotional pleasure. He also see great lovers like Tristan and Achilles who lost their reason for the sake of desire and he see Cleopatra, whom he see as voluptuous, a constant threat in many hagiographies speaking of the temptations of saints. We read further on in the 5th canto:

To sensual vices she was so abandoned,
That lustful she made licit in her law,
To remove the blame to which she had been led.

She is Semiramis, of whom we read
That she succeeded Ninus, and was his spouse;
She held the land which now the Sultan rules.

The next is she who killed herself for love,
And broke faith with the ashes of Sichaeus;
Then Cleopatra the voluptuous.

Helen I saw, for whom so many ruthless
Seasons revolved; and saw the great Achilles,
Who at the last hour combated with Love.

Paris I saw, Tristan; and more than a thousand
Shades did he name and point out with his finger,
Whom Love had separated from our life.

One of the many things Dante tries to bring attention to is that love and desire might reflect one another – but they are not necessarily in balance all the time. We can lust for something and seek to possess and walk then in the land of potential obsession or we can love and dwell in the islands of possibility and freedom.

Love is the archetypical idea from whence lust sprung forth and is as such a spirit of pleasure that unfolded when Eros met Psyche in their meetings veiled in nocturnal fire. Love and lust is born from this same nocturnal fire we know as Venus – but She also rules the sign of the Scales (Libra) where love and lust are the heart and blood in the scales.

So, I say; know your sin...and through this you shall know yourself...