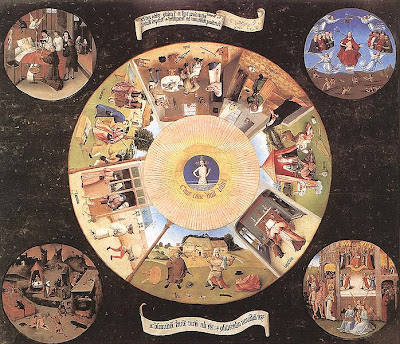 “Desires and greeds will leave you
The moment you are dead
Your beloved will not be with you
Even for a moment.

Destiny will take you
To your grave
Insects will come to you
In darkness.

Your wealth and fames
Will leave you in a second
When you are dead
All will forget you finally. “

Greed or avarice was together with envy and pride considered most grave of the cardinal sins in Dante’s The Divine Comedy, where he in canto VII in ‘Inferno’ sees the greedy ones as turbulent waves of desire and longing that remains unfulfilled and in a state of constant frustration.

Dante saw this sin as particularly bad because of the inclination within and the consequences of greed. The inclination is one solely focused upon the temporal and the wealth possible to accumulate in the restricted material realm. For Dante this would be a beastly being, a being with no connection with mind/nous – someone who had cultivated the downward inclinations of one’s soul, those that seek to quench appetites – and in this case storing up wealth, denying others of their part.

Robbery, treason and disloyalty are natural consequences of this quality and naturally we find priests, popes and nuns in this circle of Inferno who have used what is holy to become thieves and secure material wealth. Not only this, but greed can also touch upon the spiritual and from this we find spiritual conmen and merchants of magic. There are several people who possessed great knowledge and make a living from their work as a spiritual doctor. And there is nothing wrong in this. But if one hold as sole income a spiritual work one can experience in this profession as in all other that bills are piling up – leading to abuse of whoever knocks on the door and in this an exploitation by fear, threat and dread – the machinery of misery when she searches wealth... can kick in. What once was a rushing river turns into a muddy stream of opportunitism where one feeds upon the misery of others to covet one’s own misery. Naturally a doctor of the soul should be compensated for his or hers time, work and effort, like any other doctor or professional – it is about moderation and awareness. It is not about the ways of the Holy Roman Church that by portraying the image of the meek and selfless monk made itself fat, beautiful and wealthy on donations, legislations and fraud.

It is about not growing big greedy eyes on the worldly that is certainly a ruin in the end, where one need to keep up a fictional appearance and feed lies to ones fellow beings – in return of money. It is about a rejection of the spiritual work to turn into robbery instigated by putrid manipulations or simply said; trickery, which is the tool of a thief.

I believe he who is satisfied is rich – he who always desires for more should watch out for the spirit of greed. Satisfaction is therefore a measure of need and want if one approach the measure in honest self reflection. If we are satisfied we will also search for the satisfaction of others and we will reach out in the spirit of mutual reward and betterment. This is not greed, but the lovely spirit of abundance entering the dance of life.

Greed is not about being rich, it is about our attitude towards worldly goods and riches and the appetite swirling beneath its accumulation. Greet is a desire to hoard wealth – so it is in the greed we find the power that makes luxuria (lust) into a sin – it is not the desire for the realm of Venus, but the desire to besiege it… hence the forgotten term of ‘cupidity’ to lust for material wealth and to possess things and people, ultimately leading to violence, simony, nepotism and political manipulations for self serving ends. Greed is a vice that affects everyone in the circle of the greedy, either by robbery of their goods or by favoring others with more than what they truly need. At times people use the word ‘luck’ for the possession of wealth that was manipulated towards their possession – but ‘luck’ is really a spirit of divine design. Luck is what The Golden Legend tells in regard the Bishop of Myrna, St. Nicholas who was made aware the troubles of his neighbor, a nobleman falling ill of wealth and saw no solution to his despair than selling his three daughters to a bordello. Upon hearing this St. Nicholas threw three nights in a row three hands of gold into the house of the neighbor so he could set his business straight and marry his three daughters of in a good manner, as was the custom of the time (5th Century AC).

Greed can also take the shape of over spending, and is today seen as an addiction, speaking of shopaholics and those who devastate their own income in an illusory generosity with others. Greed is the sister of pride and the brother of envy, a triad a perpetual ruin and spiritual blindness, or as in the words of Victor Marie Hugo:
Envy And Avarice
Envy and Avarice, one summer day,
Sauntering abroad
In quest of the abode
Of some poor wretch or fool who lived that way--
You--or myself, perhaps--I cannot say--
Along the road, scarce heeding where it tended,
Their way in sullen, sulky silence wended;

For, though twin sisters, these two charming creatures,
Rivals in hideousness of form and features,
Wasted no love between them as they went.
Pale Avarice,
With gloating eyes,
And back and shoulders almost double bent,
Was hugging close that fatal box
For which she's ever on the watch
Some glance to catch
Suspiciously directed to its locks;
And Envy, too, no doubt with silent winking
At her green, greedy orbs, no single minute
Withdrawn from it, was hard a-thinking
Of all the shining dollars in it.

The only words that Avarice could utter,
Her constant doom, in a low, frightened mutter,
'There's not enough, enough, yet in my store!'
While Envy, as she scanned the glittering sight,
Groaned as she gnashed her yellow teeth with spite,
'She's more than me, more, still forever more!'

Thus, each in her own fashion, as they wandered,
Upon the coffer's precious contents pondered,
When suddenly, to their surprise,
The God Desire stood before their eyes.
Desire, that courteous deity who grants
All wishes, prayers, and wants;
Said he to the two sisters: 'Beauteous ladies,
As I'm a gentleman, my task and trade is
To be the slave of your behest--
Choose therefore at your own sweet will and pleasure,
Honors or treasure!
Or in one word, whatever you'd like best.
But, let us understand each other--she
Who speaks the first, her prayer shall certainly
Receive--the other, the same boon _redoubled!_'

Imagine how our amiable pair,
At this proposal, all so frank and fair,
Were mutually troubled!
Misers and enviers, of our human race,
Say, what would you have done in such a case?
Each of the sisters murmured, sad and low
'What boots it, oh, Desire, to me to have
Crowns, treasures, all the goods that heart can crave,
Or power divine bestow,
Since still another must have always more?'

So each, lest she should speak before
The other, hesitating slow and long
Till the god lost all patience, held her tongue.
He was enraged, in such a way,
To be kept waiting there all day,
With two such beauties in the public road;
Scarce able to be civil even,
He wished them both--well, not in heaven.

Envy at last the silence broke,
And smiling, with malignant sneer,
Upon her sister dear,
Who stood in expectation by,
Ever implacable and cruel, spoke
'I would be blinded of _one_ eye!'