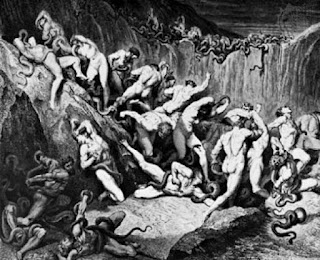 “The soul, being created prone to Love,
is drawn at once to all that pleases it,
as soon as pleasure summons it to move.
From that which really is, your apprehension
extracts a form which unfolds within you;
that form thereby attracts the mind’s attention,
Then if the mind, so drawn, is drawn to it,
that summoning force is Love; and thus within you,
through pleasure, a new natural bond is knit”
- Purg, XVIII Ciardi, 16-270

Sloth is recognized by a failure to utilize ones gifts and talents, it is about forcing others to do ones own work and to reduce oneself to mere existence where one turns into a burden for all – even for one self. It is a sad condition where disbelief has entered the person’s life and generates carelessness and fits of despair. Laziness has generated the illusion of being a captive in an impossible complication. But there is no such thing as impossible complications, just situations scaled in degrees of difficulty.

The sluggish one is someone who has given up on life, on friends, on Fate and on himself. The sluggish one is negativity in person and contaminate all with its hopelessness and sulking amidst gluttony (gula) and lust (luxuria) that hives off the natural kakodaimonos of the sluggish escapist. Sloth has turned into absolute selfishness where one become a burden to ones surroundings where one’s own misery and hopelessness becomes the ominous worth of one’s sorry excuse for a life. A life where one feeds upon others goodwill and favors, where one expect the world to listen to one’s putrid lament while one is not giving anything to anyone – not even to oneself. Sloth can work as a darkened scale where one pleases others because one has renounced ones centre or that one like a beast of pestilence demands the world to attend to the suffering void of one´s painful existence. In both cases one has sacrificed ones soul to the realm of Hypnos and has taken greedily the chalice of Lethe’s waters of forgetfulness to mend ones pain and self-inflicted soul-sores. This is true sloth; a denial of love both its coming and going...

Sloth is said to be the spirit of the daimonic gatekeeper Aergia, child of Aether and Earth, who watched the gates of Hypnos in the realm of Pluto and fell sway to his powers and fell into accidia, or ‘being consumed by sleep’.

The parenthood is interesting, because according to Hyginus several of the most grave sins were bon from Aether comingling with Earth, such as Wrath (Ira) and Pride (Superbia), but also the spirit of Incest (Incestum), Lies (Mendacium) and Fear (Timor) were brothers and sisters of Aergia, the spirit of sloth.

Sloth could be understand more as a form of indulgence than mere laziness, we are speaking of a station beyond laziness, where one’s sluggish ways has led to a reluctance towards life and one is simply giving up and just comply with whatever whims and commands someone expresses, one turn into a stupefied pleaser of the world renouncing ones will and soul to the crowds.

But we are at the core speaking of sleep, portal for dreams; the realm of Hypnos.
Hypnos was the daimon of sleep and his realm was found in the darkest recesses of the night or Nyx – his mother. He was brother of Thanatos (death, but peaceful) and Oneiro (dreams). His form was that of a winged young man, similar to an angel, holding a horn of poppies and a torch turned towards the ground.

Dreams comes in a variety of manifestations ranging from the divine dream that hungers for manifestation to the dull day dream of someone who finds himself locked down in a situation of dislike and disgrace that one seek to escape by living in fantasy and illusion rather than the magical dream of possibility. The sin of sloth is to renounce the divine dream in favor of escapism. Sloth is to drink so hardly from the cornucopia of opium that one gulps down Lethe’s water and forgets Self and purpose in a dreadful dross of existence awaiting to become dirt and earth… So Hypnos, great daimon can give you Thanatos or Oneiro, death or dream… in the words of Edgar Allen Poe:
A Dream Within A Dream
Take this kiss upon the brow!
And, in parting from you now,
Thus much let me avow-
You are not wrong, who deem
That my days have been a dream;
Yet if hope has flown away
In a night, or in a day,
In a vision, or in none,
Is it therefore the less gone?
All that we see or seem
Is but a dream within a dream.

I stand amid the roar
Of a surf-tormented shore,
And I hold within my hand
Grains of the golden sand-
How few! yet how they creep
Through my fingers to the deep,
While I weep- while I weep!
O God! can I not grasp
Them with a tighter clasp?
O God! can I not save
One from the pitiless wave?
Is all that we see or seem
But a dream within a dream?