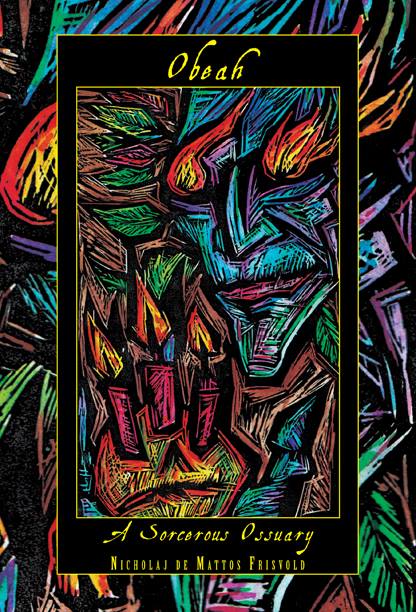 The first encounter the Western readers have with the word ‘Obeah’ is often through Aleister Crowley’s received text, Liber Al vel legis where we can read: “Also the mantras and spells; the obeah and the wanga; the work of the wand and the work of the sword; these he shall learn and teach.” (I:37). Crowley defined Obeah as the action potential of the magick of the secret light and understood this to be, together with the wanga, to represent the entire plethora of magical external expressions. I would say, he was in a vague way, quite direct and to the point, because Obeah is indeed a form of secret light that lights up the forest of possibility with the luminousness of sorcerous potency. However, touching the circumference of this secret light, will not invite a greater understanding of what Obeah really implies.

Obeah: A Sorcerous Ossuary is a testament of lineage and secrecy that aspire to reveal some of the shadowy forms and figures of this sorcerous legacy in order to make the mystery of the forest perhaps a bit more tangible and elusive. In the presentation of the book Hadean Press wrote: “Obeah:A Sorcerous Ossuary teases open this Caribbean mystery and reveals a crooked path into the hidden world of Papa Bones and Sasabonsam...and the ways in which power is bestowed upon and wielded by the Obeahman.”

Obeah is about a power given, about legacy and succession, a power that can only be worked by possessing it – and its possession is gained in line from Obeahman and women to the next generation. It is a power given that must be sealed in fire – a fire only spirit can bestow. In this way - Obeah protects itself and remains what it is - even revealed, it will remain concealed. I recall my Trinidadian initiator into these mysteries, prior to giving me the obiya, as a response to my thousand immature questions saying: “You need to have the obiya if you are to understand obeah, if you don’t have it, you will not get it, at least not really.”

I found his sentiments to be true. To describe Obeah is like describing the empty spaces in the atomic construct, an attempt of defining ‘power’ in its most subtle of meanings... We can only arrive to an approximation in definition and presentation where the experience of this gift makes up the threshold where we cross over into deep understanding... still the obiya when exposed to the dim light of a forest of words will affect the world... and a clarity will often descend as the ossuary shakes and rattles in the dance of words!

Obeah:A Sorcerous Ossuary can be ordered from Hadean Press as a hardback, ebook (epub/mobi) and a limited hand bound edition of only 21 copies.