The Veneration of the Birds of Night 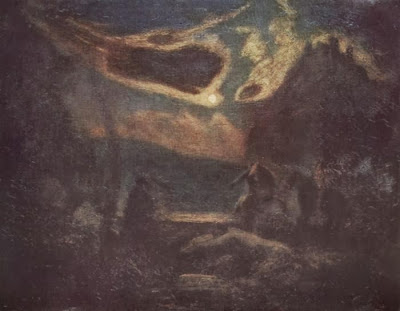 I believe Witchcraft is a poetic – and noetic – reality.  A dramatic poetry with tangible effects on the world... Awo Fálàdé is of the opinion that witches should be left alone to do what they are assigned to do, that the path towards this potency is to rocky, ruddy and potentially harmful. And indeed a power that represents paradox, tension and love, conflict and cooperation, comes with its challenges.  Fálàdé thinks that these forces should at best be appeased, never worshipped, but always be respected and recognized. He is here speaking of Ìyàmi Osorongà and the àjés. Ìyàmi Osorongà, ‘the Mother of the power of transformation that sounds around in the worlds’, is also known as Ìyàmi Eleye, The Mother of the Birds (emphasizing nocturnal birds). We find here a paradox and a contradiction in all possible levels. Ìyàmi Eleye is representing the power of woman in the shape of otherness and this power can take the shape of àjé, which are potencies anchored to our emotional field as well as the manifestation of intuitive wisdom surging from the womb that is used to crown and bless kings. In other words, the social function of Ìyàmi is about gathering and dispersion by handing down ase/power to a male regent, who in turn will hold the same capacity of instigating cooperation and conflict as the powers who blessed him were representing this contrast and paradox. The Mother who holds the powers of the witches have a social function, without her there will not be a new king and she can also command the suicide of a king who behaves in improper ways. In this She is just expressing in a social setting the dynamic of the power she represents, the power to break or make whatever she seeks to maintain or destroy.

The power known as àjé or eleye, brings the same paradoxical dynamic to the person who holds this power, because the àjé is understood to be a bird, and through this we find its relationship to the emotional field, fleeting and flowing in inconstant ways in an ever changing world of paradox and opposition. The àjés are seen as birds, predominantly nocturnal and predatory birds, all birds with long beaks have some affinity with this current and flux of force, because of the particular nature they express. Birds in general are defined by their tendency to pursue a goal and then fly away, just to return and return until the mission is accomplished. Birds are a metaphor for the restlessness within the emotional fabric of the soul as much as it is a metaphor for astral travel and the influence of the unexpected and cataclysmic. Birds came to the earth in the odù Òsá méjì which is an odú that speaks of radical change, enmity and influences beyond human control – in this scope àjé would be a praeterhuman power that some humans, in particular woman, possess or are given. For woman to receive àjé would mean to have one’s birthright affirmed, for males the access to these mysteries is regulated through what Destiny reveals in initiations prior to possessing ‘the bird of witchcraft’, meaning males can be accepted or denied, while woman is always welcome to posses this form of ase.

In many depictions of Ìyàmi Osorongà we see her as a mature woman holding a calabash on her head or in her hands. This calabash is in some traditions said to contain the ajoguns (sometimes spelled as ajeguns caused by Yoruba word play similar to cabbalistic temurah, into meaning ‘the spirit of paradox holds great power’), the spirits of misfortune and in other traditions said to contain the àjés. Ìyàmi Osorongà is the outlandish Matron that secures these powers and she only opens it when a given human being resonates in a particular vibration that serves as a key for unleashing these forces. To use a parable, She is the word of God, and whomever sets out to penetrate these secrets are also preparing a bed of doom and confusion. These are forces we should approach gently and softly and we should always know our place in the world unless our place in the world turns into a black hole of grey matter... because we human beings influence creation and its movement...
Awo Falokun explains in a commentary to the odù ogbeyono, which speaks of the anger and fire of the àjés, the following:

“The Eleye are elemental spirits that shape the development of life on earth as a projection of human consciousness. This means they are a manifestation of consciousness that has evolved through the course of evolution. The statement being made here is that human consciousness can affect evolution in ways that are not consistent with the harmony and balance found in pre-human stages of existence and the elemental spirits cause destruction in reaction to this failure.”

And in this we find yet another paradox, it is this power that makes kings become kings on a social level – and this might explain the inconsistent play between ruthless corruption and generous compliance we find amongst rulers even today. On a personal level this power can be eruptive, destructive and detriment to good fortune as much as it can cause love and harmony to take place. It is a volatile power, volatile as a bird, it is the glue and solvent of the cosmic fabric and we choose by our actions and choices the harmony or dispersion, we always choose whether we open this Pandora’s Box or not, as individuals or as community.

The power held by witches is a red force whose nature is to bend or mend, to break or make and because of this we should give reverence – and not worship – so we can respect the forces that can make or break our good fortune... Respecting what can break us will make and mend us. Ase!