On Initiation to Orisa and Ifá 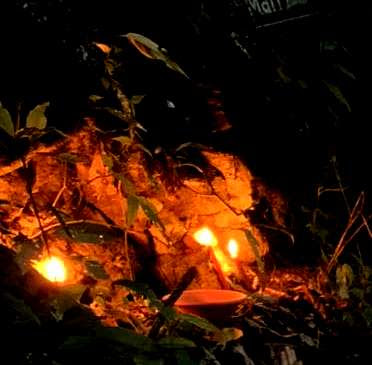 A frequent question we have received over the last years concerns ‘having path’ to make orisa or Ifá in the sense of being accepted by orisa to initiate. From a traditional perspective this idea of making a divination to see ‘if’ you can initiate doesn’t make much sense looking at this question from within tradition. This, because initiation is a good thing for everyone, so in terms of divination it is not about to see if orisa accept you, but to see how your spiritual dynamic is construed and what spiritual steps would be better for each and every person.

In traditional Ifa we can point out four spiritual steps that stands out as important for many and of these four, the first three would be beneficial to do for every one of a sound and good mind and heart. These steps are:

1.      Esentaye/Ori ceremony which commonly is done and given in the first week of an infant’s life. Esentaye which is the naming ceremony of Ifa is revealing how we entered the world and thus speak about the vibration and nature of our consciousness. The word esentaye do mean roughly ‘the mark I made on the earth upon arriving’. Hence; this first step would be important for the self-awareness and spiritual insight of the new-born. We often explain this first step as being a process that aims towards a deeper connection to one’s guardian angel, but in truth what is happening is that when an external igba (vessel) is given to the person who receives ori (the spirit of consciousness) is that our spiritual ‘head’ receives added strength and direction. In many ways this first step carry resonance with the Socratic daimon that would reveal itself in intuitions, dreams and inner dialogue of counsel. Ori is the first part of the word ori-sa, orisa meaning ‘a shard of consciousness’, hence just as a given orisa represents a particular form of cosmic consciousness, so does our ori represents a persona typical consciousness that entwines into our sense of self, our ego and our sense of meaning and destiny.

2.      Isefa or ‘a hand of Ifa’, or more correctly, ‘a traditional shard of Ifá’ is an initiation doen both to lift a bit the veil of destiny so we can gain more clarity into how we should walk the earth in order to attract blessing, plenty and fullness in this human existence. Also, this initiation is reminding Iku (Death) of the pact he made with Orunmila, the spirit of wisdom that no one that is marked by the ide (bracelet) of Ifá shall see death before one’s allotted years on earth.

3.      Igbodu Orisa is initiation to orisa. This initiation can be done to the orisa that is in particular proximity with your ori, the ‘orisa colour’ of your consciousness so to speak or one can be initiated to the orisa that is serving as the patron of the family or village where the initiation is done. For instance, in the case of Egbe Ifa Iboji Awon Funfun we come from families venerating Ogun, the spirit of fire and the forge and Osun, the spirit of sweet waters and honey and thus an initiation to either of these two orisas will connect the iyawo (the person undergoing initiation) to a rich and powerful lineage of these two forces. Then at a later point one can then initiate to the orisa or orisas that give support to one’s consciousness, that one is advices to bring into one’s life. This means that the idea of someone having been given ‘wrong head’ is simply not true. We might think about our ori in relation to orisa as a solar system. Our ori is there in the middle, central and then the orisas are gravitating around the ori, someone far, others close in relation to resonance and affinity with the particular ori.

4.      Tefa which is often called ‘to receive two hands of Ifá’, which is a lengthy initiation that installs into the iyawo the seed of the wisdom of Ela and imbues the Awo (or Babalawo or Iyanifa) with the ase to perform divinations, ebo, or sacrifice, of various types, initiations and medicine.

These first three steps are good for everyone to make and the more you invest yourself in these spiritual steps the more gain will you gain from it. Whilst Ori/esentaye and isefa are quiet and soft initiations that solely give a compromise with yourself and your ori when we move towards orisa initiation another level of seriousness should be noted. What take place in the initiation to orisa, which we call igbodu is that the seed of a given orisa is planted in you and it really depends on the iyawo what will come from this seed… Igbodu, means to be brought to the ‘womb of the forest’ hence undertaking this spiritual step is a rebirth as initiation do mean, to initiate or begin something. This means that performing igbodu orisa turns you into a person that need to give this potency of orisa time and conditions to grow into a healthy power within. This always takes time and as we need to have patience, care and love with infants as they grow into maturity, so it has to be with the one who undergoes initiation to orisa.

Unfortunately there is a tendency in the diaspora to see initiation to orisa, which at times is called to be ‘crowned’ as a way of escaping one’s own darkness and instead set in motion one’s own dysfunction in the communities and followings the new-born “king” or “queen” establishes by assuming the royal staff far too soon. Be careful with these people and be aware of those who seek to dominate you and exercise control over you, that uses a vocabulary full of possessive pronouns and paranoid and vengeful talk. “You belong to me now”, “you offended orisa”, “Sango is angry with you” and so forth. Be observant with all forms of attitudes that induce a negative, co-dependent and abusive relationship with orisa and godparents.

Orisa initiation comes with its trials and ordeals for sure, but your godparents should be a part of the solution and not add burden to the ordeals ahead. This is so because we all accumulate a certain level of falsity as we move through life and when we make igbodu orisa this falsity is challenged by this pure and powerful natural force that is planted within our being. As it grows and spreads, our hypocrisies and falsities will become evident and it is in this long period of becoming into orisa that we need supportive godparents. It is in this way we will place our feet on the path of destiny as a spiritual being undertaking a human journey.

Hence, all these spiritual steps are marvelous in their own right and there is no such thing of gaining admittance through a reading to see if orisa ‘want us’, no, we make divination at the door of initiation to see how we should conduct ourself as we undertake the spiritual steps that enable us to walk more graciously in the world. Everyone of sound mind and heart will always be worthy of becoming more authentic as a person and richer in spirit and contentment. The spiritual steps that mark Ifa-orisa initiation take as measure to accomplish this.