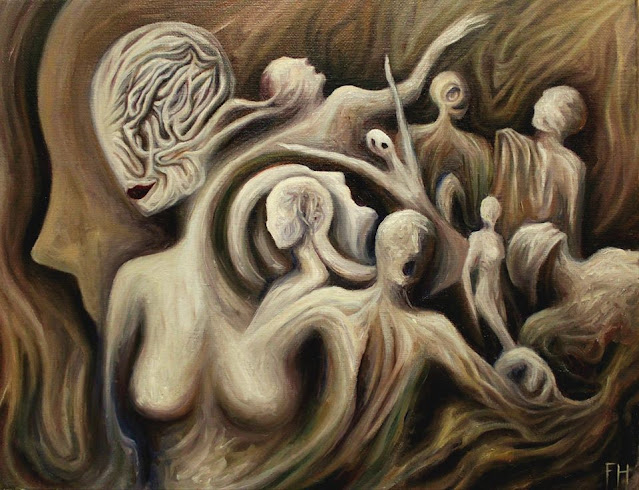 Madness, drugs, and magic are no strange bedfellows. Ever since the shapeshifting intoxicating madness in Petronius Satyricon these elements have formed a trinity for good and for bad. What we know as shamans and witches used strange medicine and unguents to traverse the various thresholds of human consciousness in order to break into the other side. Philosophers from Plato to William James and Michel Foucault experimented with and used LSD and opium. Poets, writers are well known to use stimulants it be Philip K. Dick fleshing out half a dozen books in less than a year in manic speed rush or Coleridge dreaming forth Kublai Khan in the fog of opium. It only makes sense that people with an interest in magic, to know to explore multiple worlds and strange terrains and also have an interest in the varied forms of altered consciousness various stimulants can open up for. I have no problems with stimulants, but I do respect their power, and their capacity to heal and harm. It is how an excess of alcohol tends to not bring out the best in us and how some stimulants overall work counter to our spiritual constitution. The issue with stimulants is how they are used and for what ends and the importance of knowing the difference between abuse, recreational use, therapeutic use, and spiritual use.

This means that there are some stimulants I have established prejudice against, such as blow and meth, as there is little spiritual and no therapeutic worth in them. Also, its recreational value and tendency towards abuse, depression, and paranoia are elements worthy to be conscient about.

Let’s take blow/cocaine which is a very popular recreational drug used with alcohol. The alcohol sedates the negative effects of the blow, like nervousness and anxiety, and gives an exhilarating high that makes you feel good. It is understandable that in a world that’s o often makes us feel bad that we want to feel good, and whilst I find this form of intoxication annoying to be around, that’s my prejudice. And even if I am aware of the benefits this had for Sartre and Freud, overall, I would still conclude that it has its limits when it comes to therapeutic and spiritual uses and that there are better ways to get your recreative high.

Meth however appears to be treated as a stimulant with magical or spiritual benefits currently, and I dare say that the spiritual advantages of meth are so slim that it’s not worthy. A famous man with strong occult interests like Hitler in the last two years of the Reich was hooked on Eukodal (Oxycodone) and Pervitin (Methamphetamine) and it didn’t do anything good for his mental health or decision-making. Meth is relatively long-lasting with a euphoric and exhilarating high that makes it easy to break down barriers and inhibitions. Hence, in this state of manic, self-absorbed alertness where hallucinations also can occur the strong outlandish and equally strong self-absorption can easily get the planes confused. Besides the tendency towards aggression and generalized confusion, there is the paranoia. And paranoia is not metanoia, it is not a spiritual ecstasy or an epiphany, it is in layman’s terms madness, it is what we know as psychosis, a paranoid delusion that can be triggered by substance abuse.

Too many sad stories have landed in my lap over the last decade related to the consequences of meth and magic. Stories that come from misattributing something highly personal and selfish to spiritual causes. A terrible lie rising from self-seduction caused by the spirit of the crank that makes possible rape, violence, and heart-breaking abuse and addiction. I mean, when King Crank inspires you to move on in the world in predatory solipsism or destroy your temple in an act of magnanimous revelry of your godlike being things have gone to far and it is difficult to justify this as having any spiritual use.

Overall, I find it difficult to see how stimulants, like cocaine and meth, can provide that centre in heart and mind (Iponri, or the calabash that holds your head and heart in Ifá) that establishes the spiritual centre within. Rather these stimulants agitate and deviate the centre and give attention to the ego by drawing down the curtains for the self. Or in psychoanalytic terms, the superego is expelled so the trauma and rubbish in the Id can freely flow up in the ego and have its hours of fame and appreciation where trauma and depravity are celebrated as virtues and accomplishments.

Going off the railing in full-on meth frenzy doesn’t make you a powerful left-hand magician or a dangerous shaman. You are not powerful because your meth-induced paranoias have filled up your world with enemies and hostile spirits.  Chances are it makes you a jerk and an obnoxious self-inflated fool.  Because, yes, in truth, all stimulants that alter our perception establish a unique field of awareness that naturally bring on spirit denizens that are harmonious with that field of sensibility generated through the substance. And as above, so below, so it is also in the world of spirit as in the world of humans, not everyone is benign, cool, and good.